SDRadio from I2PHD was my first introduction to SDR receivers. No transmit but a good straight forward bit of software receiver.

Here it is receiving SSB from my Softrock TX/RX v6.1.

I have not even tried the Softrock on my Dual Core Laptop machine. I was aware of the need for not just a decent sound card for serious SDR use. This was the ‘need’ for a new shack computer that I had been overlooking for several years.

I have just come across the following from Duncan M0KGK, I will let him do the talking.

06-Nov-2005: The Delta card has arrived, and the difference in performance is absolutely astounding. Click the pic on the right (below) to see the substantial difference in noise performance between the AC97 onboard chipset and the Delta-44. 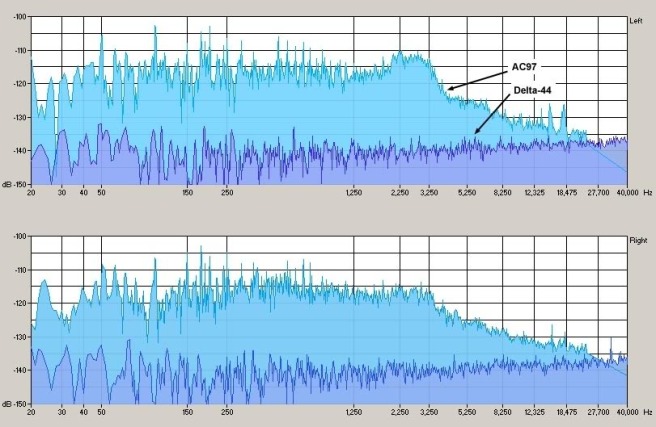 I was going to repeat the test above with the spurs and overlay them on the graph, but this exercise proved pointless. At the same 48kHz sampling rate all unwanted images were down in the noise and could not be measured.

Quality of received audio using Softrock 40 / Delta-44 / PowerSDR is excellent. I did some back to back listening tests on CW and SSB during busy contests between the Softrock and the Yaesu FT-857D which happened to be plugged in at the time. In all cases, the readability of weak DX signals from the SDR was better. The signal to noise seemed to be noticeably better too.

The 857 is not graced with the best receiver in the world, so it’s my intention to do back-to-back tests when time permits with the FT-990 and FT-101E, both of which are (IMHO) better performers. Next steps are to get the Softrock into an enclosure and feed with an external supply.

If you are not too sure of your dB’s and analysing graphs at a quick glance there is well over 100 times more noise there.

Another very useful graph from Duncan is the noise comparisons of different sound cards. The Delta44 is the same performance as the Delta66,in fact I understand it has been optimised recently.

I am sure Duncan will not mind me repeating this. Incidentally he is the author of the KGKSDR Software. Yes I have SSB transmit working fine now, it has benn tested across town but no distant contacts have been made yet. Whereas the narrow band mode BPSK31 has produced more contacts, a nice long one with PA0MJK in the Netherlands today revealed that he too has built a RX/TX v6.1 but has not had it on TX yet.

Delta44 cards have been in short supply, I purchased mine from Dolphin Music. I was astounded by their price,service, delivery speed and after sales follow up. I told them I would not hesitate to recommend them to the radio world as a supplier.

I looked at the Main3 Software programs on my Laptop, (prior to building the SDR) and classified them thus.

Rocky: Simple, looks nice plays the I/Q files so that had so that I could get a feel.

KGKSDR: Just about the right complexity, written for the Softrock. But hang on, that awful dancing display, it would not play my I/Q files so I could not give it a go.

PowerSDR: Quite complex having been written for the SDR100. Once again, wild dancing displays, it did play back I/Q files but signals were difficult to spot.

As can be seen from my postings Rocky was the one that worked easily on my dedicated SDR computer. It also supports decode of BPSK31 internally. I have therefore concentrated on Rocky for PSK31 and CW contacts.

I have returned to the other two in my spare moments. With a little setting up on KGKSDR I have got it to my liking and I am working on getting SSB TX going.

For now here is a capture of F6GUU on PSK31 during our contact this morning, his peak is just to the right of the vertical pale green line, I am using the CWLSB filter.

As usual Right Click on the image and select View Image for a full width display of 7.00 to 7.10 Mhz
The dB scale is quite accurate, the S meter is rather mean and needs to be set for a reference S9 signal.

This is a screen capture of my laptop Realtek HD sound displayed by Rocky 3.32.
I don’t use it for SDR so the input is connected to the internal mic. Background noise from the mic. accounts for some of the bump in the middle. HF response can be seen to fall off at either end of the display, there are also some large spikes, maximum output sample rate is 48KHz but it is fine for playing back a 96KHz sampled I/Q recording.

If all Radios were SDR’s how nice it would be, problem solving is made easy.
Today I put the Softrock on, tuned to my usual spot on 7.00Mhz(the PSK slot) to be greeted by a burring noise and a spiky waveform peaking 20dB above the noise floor.

On the standard HF transceiver I might have thought, just another noise on the band. With the SDR I closed the display to show the whole band. OK there are six of these peaks.

Click on the central spike to measure the difference in frequency between each. 15,650Hz ah ha television do we have a new or faulty TV in the neighbourhood? I confirmed by removing the antenna that it was coming in via that route.
My Sony portable radio was out in the car, I popped out to fetch it and tuned it to one of the peak frequencies, I spoke to my neighbour, it is not me he said. No, it was quiet around his place. Back to my house and the noise appeared, stronger near mains wiring. Up to the shack, it was stronger still, I closed down the computers and monitors, it was still there. I switched off shack mains, still there.

There was only one more thing, plugged into a separate socket, a wall wart, it powers the surveillance camera. I switched it off and away went the noise.
Please refer to my previous postings. I have been using the shack FSTV camera for off screen video of the Softrock. Hmm, I borrowed a lead from the video mixer, this left the surveillance camera un terminated, re terminated all was clear.

Yes the talkies are here, I promised sound, the SVHS camera was not an improvement for off screen video. So back to the Web Cam, the next step will be to use a separate computer to record the video, so reducing the SDR machine overheads.

This recording is a busy 40m with a contest on the go, SSB end.

Next a listen to some CW stations.

For now I will publish and be damned.